Well in the effort to save a little money in postage, we are doing a Merry Christmas blog post this year. It will not feel the same in your hands and you will not get that same fuzzy feeling from getting a card addressed specifically to your or yours, but we hope you still feel our love being sent your way!

We have tried to take a few fun pics from our Christmas tree to add some festivity.  Our tree/branch, stump, and most ornaments were found out in parks while on our walks (no worries, all kosher, we think). No making fun of our tree!

Posted by Unknown at 7:41 PM No comments:

New Zealand is Better with Miriam and Gordon!!

If you have read our previous posts you already know that Queenstown is a magical place, but now it holds for us an even more special allure.

For just over a month and a few days now, Miriam (Sarah's sister) and Gordon (her most handsome man friend) have been living in Queenstown, NZ and we have been unable to go see them!  It has been quite unusual to have family living here in the same country (and only two hours away) and combining that knowledge with the fact that we have yet to see them - strange indeed!

Well no longer!  Sarah had four days off from work so we packed up some gear and headed up to see our beloved Miriam and Gordon (and it was about time too).  And they have done a great job at settling into the community there, making friends, getting jobs, and investigating much of the mountain trails this area has to offer.  No sooner than we had arrived, we threw on our walking attire and headed up a mountain Miriam had chosen for our first hike together.  So much fun!

It is an absolute pleasure to see people you love and like, but to also do things that you love with those same people is a true blessing.  Our days with Miriam and Gordon were spent traversing amazing trails in the beautiful mountains surrounding
Qtown, tasting some of the best wines NZ has to offer (everyone calm down - even Jesus drank wine and if for some reason you don't think so it's because you're reading your Bible wrong - see we can laugh), eating at some very fine establishments, listening to amazing music, and having some much needed conversation with our friends.  We cannot really find the words to describe how truly wonderful it was to see Miriam and Gordon and spend this time with them.  Not long after we had decided to move to NZ, Miriam called Sarah and asked if we minded her "crashing our adventure."  We laughed, not only because we have no rights to this truly amazing place, but because (as the blog title suggests) we love love love the idea of family and/or friends being here with us (and we like Miriam more than most...and Gordon, but don't tell them as it might go to their heads).

Such a fun four days!  As usual we will show most of our adventure in photos because they speak so loudly. I will add some captions to each photo to explain where we were and what we were doing, as most of them have stories worth an entire blog post... but seriously who is going to read them!  Ha. And this is very few of the photos taken.  We hope you enjoy looking through them even 1/4 as much as we enjoyed taking them. If you click on one of the photos it should enlarge the shot and then allow you to scroll through one at a time if you should so desire. Happy day from NZ everyone!!

Posted by Unknown at 1:44 PM No comments:

Motorcycles and The Invercargill Blighs

This past weekend the entire city of Invercargill transformed into a motorcycle haven during the Burt Munro Challenge.  Burt, who has been mentioned in a previous post, helped to make the city famous during his lifetime when at over the age of 60 he broke the land speed record for under-1000 cc on his motorcycle that was around 40 years old.  He tinkered and tweaked until it really moved.

In honor of this man and his accomplishments, the city of Invercargill hosts numerous days of motorcycle racing every year.  Quite unfortunately Sarah had to work during the coinciding times of events for this momentous weekend, so I headed out solo with some friends we had recently made during our Thanksgiving dinners to take in some Munro Challenge.

It was quite impressive to watch different groups of competitors (broken up into packs based on their bikes and how old or fast they are) speed around the small city of Wyndham.  After learning about the life of Burt it did seem quite fitting to see it memorialized with the smell of rubber burning on asphalt at high speeds.  I know Sarah would have loved this high energy, fast racing, seldom crashing, day of motorcycle crazy, especially after her enjoyment of working at Talladega a few years back.  Who would have thought my little princess would enjoy the shaking stadium of race cars?  Well she missed out on this day and the tasty chips (fries for you back home) and a mince lamb pie (sort of the specialty round these parts - a little pie made for one that is amazingly good).  She helped put those who did crash back together as they were brought into the ED.

While Sarah could not make it to the Munro Challenge, we were able to hit up another museum in Invercargill a few days before.  Anderson House Park is a house that the Anderson family built and lived in (obviously), which has now been renovated into a fabulous art museum.  As also previously mentioned in a prior post, we are watching a show called "A Place to Call Home" that centers around the Bligh family from Inverness, Australia set just after World War II.  Driving up onto this property felt similar to the sort of feel one gets while watching this show, and from doing some reading it seems the Anderson family was equally as active in the Invercargill community as our TV family is in Inverness.  We were not allowed to take any photos inside of the house due to the artwork, which is a shame as the house is beautiful inside and out, but we have some nice shots from outside.

The house is surrounded with walking paths, gardens bursting with vast arrays of colorful flowers, littered with waterways surrounded by boisterous ducks, and a giant playground for any children that one brings with them to the park.  This place is all put together quite nicely and after all of that admission is free when it is the normal exhibit!  The house and grounds by themselves are well worth the visit, so when the art is added on top of the rest it all just "sweet as," as they say round these parts.  We wandered through as much of the house as we were allowed access to (visitors are not allowed up the narrow stairway to the third floor - bummer), and then headed out to enjoy the scenery and the nature walks.  What a perfect way for us to spend Sarah's day off!

I had to put this next photo in at this size because we like it so much.  The other night while driving home Sarah noted a rainbow in the sky - who doesn't like rainbows?  While driving past Queenspark we could still see it and snagged this shot. 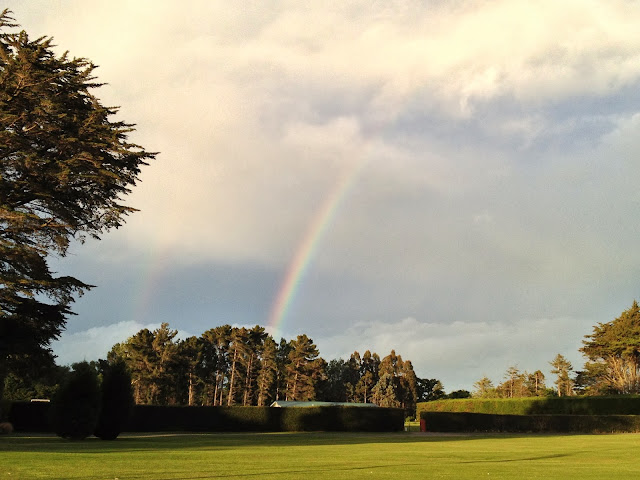 Enjoy the rest of the photos - pictures of flowers from the Anderson House Park gardens that Sarah took.  This next week Sarah has a few days off in a row and we are going to finally have the chance to go see Miriam and Gordon up in Queenstown!  If you know them or are interested in hearing some more New Zealand tales about Americans traversing through Kiwi land, feel free to follow their blog as well - click here.  They are fun people and it's been a great read so far!

Posted by Unknown at 5:25 AM No comments: